History of the Czech Nymph

The "Czech Nymph" is a term now known throughout the whole of the flyfishing world. The term itself has two elements. Firstly the actual nymphs which are quite slim, weighted, tied on gammarus hooks with bent shanks. Secondly is the actual technique, when these flies are led, short under the rod. Virtually no actual fly line is used outside the top ring. By this method it is possible to lead a much broader scale of weighted flies and many different nymphs in this way.

The "Czech Nymph" is a term now known throughout the whole of the flyfishing world. The term itself has two elements. Firstly the actual nymphs which are quite slim, weighted, tied on gammarus hooks with bent shanks. Secondly is the actual technique, when these flies are led, short under the rod. Virtually no actual fly line is used outside the top ring. By this method it is possible to lead a much broader scale of weighted flies and many different nymphs in this way.

I was lucky in that I could watch closely all the development work on these nymphs and the specific fly fishing technique. I must state that ten years ago there were only a few basic patterns, these were top secret. But despite this they gradually started to spread among a broader group of fishermen. I must admit that none of us believed at that time how famous this Czech innovation would become. It is estimated that there are now tens of original and new patterns of Czech nymphs and more are being invented all the time. 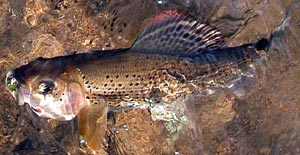 The first great success of the short line nymph technique was recorded at the World Championships in Belgium in 1986, where it brought a gold medal and the World Champion trophy for Slavoj Svoboda. Even though his winning fly at that time was the Hare's Ear Nymph in sizes between 10 - 12. Czech Nymphs as a global pattern of the fly then broke through at the World Championships in Wales in 1990 for the first time. Here it brought the title of World Champions for the Czech Team. It helped to get us the next title in 1994 in Norway and again in 1996 in Czesky Krumlov. At this event the technique was explained to the English for the first time, and they arranged a detailed publishing of all the series of "Czech" secrets. The latest great success of the Czech Nymph was the World Champion's trophy for Vladimir Sedivy in Sweden in 2001.

Nowadays when new books about flyfishing arrive there are often many new "Czech Nymph" patterns. It would be useful perhaps to explain the actual origin and formation of the fly and the technique. There has been much speculation but little real knowledge. The current captain of the Czech team Jiri Klima read a report about nymphing upstream at the 1st Czechoslovakian Flyfishing Seminar in Ceske Budejovice in 1986. But the actual origin of all this is a little bit different. 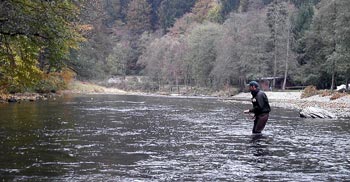 It all began in 1984 on the Dunajec river in Poland, where the flyfishing tournament between teams of Poland (A,B,) GDR and the team of Czechoslovakia was held. The Polish fishermen were fishing a short line technique, which was surprisingly easy. At that time most of them did not have a flyfishing line. They substituted a thick nylon line of about 0.5 mm in diameter, which they bound to the tip. Mr. Jelenski showed our competitors two basic patterns; these were imitations of the caddis larvae. Hydropsyche a body made from natural hare fur and Rhyacophylia which had a green body and green tail. The backs were bound from peacock fibers on both patterns. Straight hooks were used, possibly with a gentle bend. In 1985 at the World Championships on the San river, our competitors were fishing in this way and they finished second behind the home team Poland.

In 1986 Slavoj Svoboda was in Belgium as a competitor in the Fresh Water Club World Championships in Liege, where he bought a Daiwa flyfishing rod and with this new rod he won the trophy at the Champion of Czechoslovakia on the Vltava River that summer. Even today I can still see him fishing next to me using this unusual technique. As a backing material he was using Grafting Bast. Then a few weeks later he won the famous World trophy on the Ourth river in Belgium. At that time Slavoj was binding the bodies of his patterns from plastic foam, which he got from the sponge used by car drivers. Its disadvantage was its short life span. 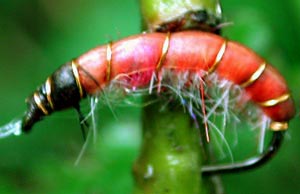 Another of his proved patterns was the "Carrot", which he brought from the Orava region in Slovakia and for which he used beige chameleon substitute and strips from a red raincoat. All was ribbed with horsehair. This nymph was also used by our competitors on the San river.

At this period the secret of the short line nymph was only known by some of the best competitors in South Moravia (Svoboda, Klima, Malasek) they won on the Vltava river and the team event. Their secret of the short line nymph was watched closely by the other competitors from South Bohemia. Between them and lead by Milan Janus they began to experiment in the Competitions an at the Czechoslovak elimination competition on the Jihavka river in 1987. One year later the team from Strakonice (Janus, Ancicka, Seknicka) won the first league competition with this technique on the Malse river. At that time the big emphasis was on the development of the back, and it started being bound from the sausage skin, later the skin of the catfish or the eel were used. These first fat nymphs were called ""Bobesh""and they belonged to the bugs category. 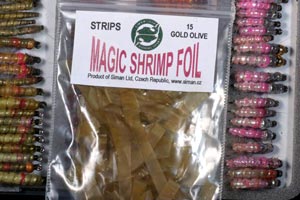 Radical changes in the appearance of the nymph were brought about by the use of ultra thin leaded wire, which led to a massive slimming of the nymphs. They also started to use the Gammarus hooks called Admiral (=Kamasan B100). This new technique was used by the competitors from Roznov (Karafiat, Machacek, Barton) who were very successful with these patterns. The next improvement was the use of thin rubber on the back of the nymph and its advantage was durability, transparency and easy tying. Firstly they used rubber strips cut from surgical gloves. Later directly prepared vinyl strips in different colours. Special plastic foil backs were the next innovation, with different printing strong colours or glitter.

Next the Hares Ear fur, even the rabbit fur in many colourful variations started to be used. By using seals fur a further new innovation started, and it has brought experiments with many different furs of exotic animals. Originally monotonously dyed bodies started being enlivened by red spots. One of the first who tried this was way the competitor Lukas Pazdernik. The real innovation the use of the craziest of colours was brought about by Pavel Machan (European Champion 2002) and also Tomas Starychfojtu (Holder of three different individual medals from the World Championships) who used many new and nontraditional materials in his nymphs.

Trips by our competitors abroad and the learning of new materials has led to the next innovations. The artistic fantasies of the specialist fly tyers who do not have any direct relationship with the competition flyfisher is a developing subject with which I am not familiar and will not comment. One of the new innovators is Mr. Bulicek, whose patterns for the Ohre rive are very original. A new competitor Oldrich Dvorak follows his own way of imitating and it is very interesting that his way is very different from the attractive nymphs of his friend Pavel Machan.

Remarkable improvements in these flies required innovations in gammarus hooks. Nowadays people demand chemically sharpened hooks from companies Hayabusa, Kamasan, Mustad, Tiemco, VMC. Competition rules require barbless hooks and it has given the stimulus for local manufacturers, where hooks from Mr. Skalka or Mr. Knapek are highly appreciated. Hooks with lead weight, became the hit of the last season. Their advantage is the extreme temper and the possibility to tie even flatter types of nymphs. Which after completion can be pressed and scrunched into the shape of gammarus.

Even the leader material for this type of Nymphing technique has made big progress. At the beginning it was bound as tapered, when it was assembled from several parts of nylon line from 0.40 mm, through 0.30mm, 0.20mm, 0.16mm, possibly to 0.14mm in diameter. Most finished at 0.18mm and it was fished with two nymphs. Leaders tapered in this way sink badly. When the next new invention came to the world, which was a one-diameter leader, which was down to a contemporary diameter of 0.10-0.08mm. Of course these modifications were made possible because of the creation of completely new fishing rods as well, without these it would not have been possible. Even the number of nymphs fished has now been stabilised at three. 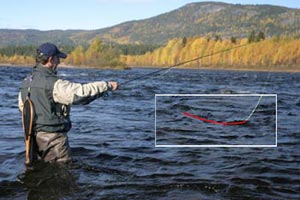 Czech nymphs are today a real term. In the top quality English flyfishing magazines there is always some information on them. Even if in time the attribute Czech is disappearing, which would mean the nymphs are not something particular to Czech. They are becoming the property of the World flyfishing family. I do not think that their development will stop, but on the contrary I would say that we will witness their next improvements and surprises of which we have no idea so far.