Although I am not a particular fan of this way of fishing, I must admit that this method brings us a lot of excitement and nice experiences because of the size of the catches.Sometimes this is the only way to fish, when all else has failed. Short nymph has been a good style of fishing in Poland, and it is amazingly popular on the Dunajec river, where the method originated.

The Basic principle of the method of fishing called the "rolled nymph" is that we fish almost under the rod tip. The short distance between the rod tip and the fly makes leading the nymph easier. Won't the fish react when we stand so close to them? Of course they will, however not all in the same way. The least shy species is the grayling, rather more is the brown trout and the most shy are species like dace or chub. Therefore this method is most suitable for grayling.

Rolled nymph works well everywhere, where fish have problems observing what is happening above the water surface, or when they feel relatively safe in the lies. So in gently coloured water, deep pools, and of course in all types of streams, we use the rolled nymph most effectively.

In these places the nymphs are best led, because the different back streams mask the irregularities in nymph leading. The more shallow and calmer the water is, the lower is the efficiency of this method and the more difficult it is to perform it. 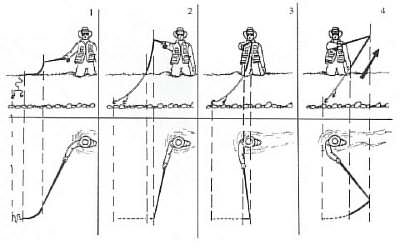 If we fish under the rod tip and cast often, then we must have a sufficiently long rod of between 2.75 and 3.35 m, which are generally used. Dynamic and frequent casts, however do not allow us to use very long rods, which will exhaust your arm. When fishing the rolled nymph, we use the floating flyfishing line, some fishermen substitute braided dakron line. Its low weight causes the team of flies to be more sensitive.

What is the best way to keep in contact with the flies in the water and lead them in the most natural way? It is necessary to fish close and to use the most sensitive connection between the flies as is possible. Part of the line or leader must also be visible on the water. We leave the thick lines, which have a tendency to some imperfections, at the beginning of the leader and also have a high water resistance. We prefer to use thinner nylons of from 0.12 to 0.18 mm in diameter.

The leader must be straight whilst leading the nymph, it is also helped by the right weight of nymphs. This weight helps the deeper and faster sinking of the flies. When fishing the rolled nymph we always use two flies. This also helps us to use some lighter and smaller nymphs. The length of the leader must always be a bit longer then the depth of the water.

If we have a well prepared rod, we stand side on to the stream and pull out about 0.5 - 1.5 m of flyfishing line from the rod rings. We cast the nymphs a little upstream and we lay the line on the surface. We let the nymphs fall to the riverbed and then we lift the rod, in order that the start of the line can emerge from the water.

The height of the lift will vary with the depth, where we fish and the length of the tip. At this moment it is very important to lead the nymphs downstream and to keep in touch with them, with the aid of a straight leader. We do not take the flies out of the water too quickly and only lift the rod tip a little. This speed, which moves the flyfishing line above the water needs to be a little slower than the surface speed of the water. The correct speed in the leading of the nymph is half the reason for the success in this method.

As soon as the line is below our fishing position, we gently lift and then recast the flies and repeat the whole process. When the nymph is being lead, we very carefully watch the line tip and a lift or strike follows every movement. In the final phase we may keep the flies near the surface of the water.

Whilst fishing the rolled nymph the lift (Strike) by hand is a little different than when fishing other methods, where we are holding the line in the free hand. Now we only hold the flyfishing line to the rod by the index finger, we also leave a loop of line between the reel and rod to cope with the first run of the fish.

The most frequent mistakes made in fishing the rolled nymph are:

There are many modifications to the basic version, described above, of rolled nymph fishing. Variations can be used to attract the fish to the flies. Lifting and lowering the flyfishing line can give movement to the flies to represent the emerging and sinking of the natural insect. Lift the flies but only by a few centimeters from the riverbed is most attractive to the fish. Sometimes moving the line faster than the stream will attract the fish as well as the side movement of the flies. However, we always start fishing according to the basic system, only when that does not work do we look for different variations.