It started as a joke... In the spring of 1995 I had tried out some shipman's buzzers on spooky trout with big success. Later in the season we had our last qualifying for the 1996 World Championship in Czech Republic and I needed to win to qualify. I was watching the others tying their flies, and I was thinking, "It's only grayling here, how hard can it be? They are taking dries and the colors seams to be most important. Let's have some fun with the other competitors!"

I tied the simplest fly you can imagine. SLF Standard - Fiery Claret at the first part (1/3) of the fly and SLF Standard - Dark Brown for the rest (2/3) and added flat pearl-tinsel as a rib. I used a toothbrush to get the fibers out to make it look like a bit bushy. The fibers were a bit long, so I had to cut them just a fraction. Finished! 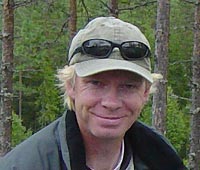 "Everybody, here is the winning fly of the competition tomorrow!" Everybody laughed. No wing, no tail and no hackle - they all thought I had to much to drink. Well, I made one more just to be sure.

When the competition started I had the new fly on as a dropper just in case. At my second cast a good grayling took the dropper. And the third cast, fourth, sixth... I ended up using only one fly the rest of the competition and with big laugh I qualified for the Norwegian Team in Czech Republic 1996.

Since then, the top placed anglers in almost every competitions in Norway has used the fly. It has been tried out in different colors, but we have landed on seven good ones. Tying the fly was not as easy as it looked, because the first time I used SLF Standard with the fibers cut in half. Because the fibers do not stick to the tying thread very well, I had to use a dubbing twister. To make the

fly the way I wanted it, I didn't twist it too much. My friends did not like to make the fly and all of them asked me to make it because "it looks better when you do it". Over the years I have tied as much of this fly to others as other flies to myself. Finally I asked Jan Siman to make an Softdub Eikre Pupa in seven different colors. No problem!

To fish this fly is easy. Add a little bit of floatant if you want to fish it as a dry fly. Move it just a fraction in front of a rise and then let it be dead where you expect the fish to take it. As a nymph you can fish it every way you want. It is all up to you and the fish!