It is a small stream about 10 meters wide with sandy river bed and depth from 0,2 to 1 meter. It has natural banks mostly consisted of meadows with sharp grass and forests. In the upper part between villages of Horni Vltavice and Lenora there is majority of wild population of brown trout with the weight at about 0,5 kg. In Lenora is prevailing grayling with the weight at about of 0,6 kg. Sometimes it is possible to catch here some rainbow trout and brook trout, but you can find here also pike perch and dace.

The stream - see the map flows through the beautiful country. The best period of the year for fishing is June (for trout) and October (for grayling). The most often used method of fly fishing is nymphing and wet flyfishing. The dry flyfishing is the best way in autumn after lung and in the afternoon, when the grayling is raising. It is possible to recommend you shorter fishing rod (260 cm), line No. 4 weighted, fine leader at the end from 0,10 to 0,12 mm and at wet flyfishing 0,14 mm in diameter. For dry flyfishing you should use all kinds of beetle flies such as Red Tag, Yellow Tag, Orange Tag, Dotterel, Prokurator etc. In sizes between 16 and 18 and doublewinged flies likeas Olive Dun, Pale Morning Dun, Blue Dun, Red Quill and for wet flyfishing March brown, Blue Dun, Iron Blue Dun, Red Tag in sizes between 14 and 16. For Nymphing are recommended various kinds of Czech nymphs (Bobeshes) in sizes between 10 and 12. There was one of the venues of the 16-th World Flyfishing Championship in 1996.

It is a bigger mountain stream up to 20 metres wide with the sandy floor and plenty of water weeds and with the depth between 0,2 and 1,3 metre. The stream banks are natural and the whole section 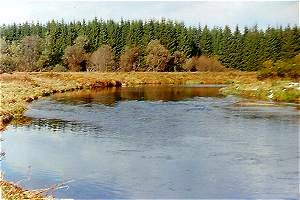 is located in The Sumava Mountain National Park, where are in effect some regulations for strolling throughout the Park. The Vltava river runs through the bent-grass meadows with a plenty of rare and protected plants. In the lower part of the stream are prevailing spruce forests.

In the upper part of the section downstream Lenora is still supplied brown trout, but prevailing fish is the grayling there, which is possible to catch there at about 1 kg of weight. Very often you can catch there either dace, pike, perch and white fish. The river ends in the Lipno reservoir at the village of Nova Pec.

The best period for fishing is from the end of September to the beginning of November. The most often catches are graylings at dry flyfishing. Fish are the most active after lunch, the best is cloudy weather, during the little olive's hatch. It is necessary to fish with a very fine way with tip of leader from 0,10 to 0,12 mm in diameter. 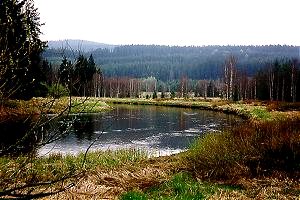 The most suitable are various kinds of doublewing flies (Olive Dun, Blue Dun, Pale Morning Dun, Apple Green Dun, Red Quill), beetles (Red Tag, Orange Tag, Yellow Tag, Dotterel, Orange Dotterel, Which, Procurator, Willow Fly, Palmers, Black Ant and Red Ant) in sizes between 14 and 20. The recommended rod is with the length about 275 cm, line 4 - 5 weighted. Other way of fishing is wet flyfishing, nymphing and usage of streamers (Muddler Minnow, Sculpin). In summer season is fishing disturbed by canoes going by and so the best time for fishing is early in the morning and late evening. In this season are used smaller patterns of sedges.